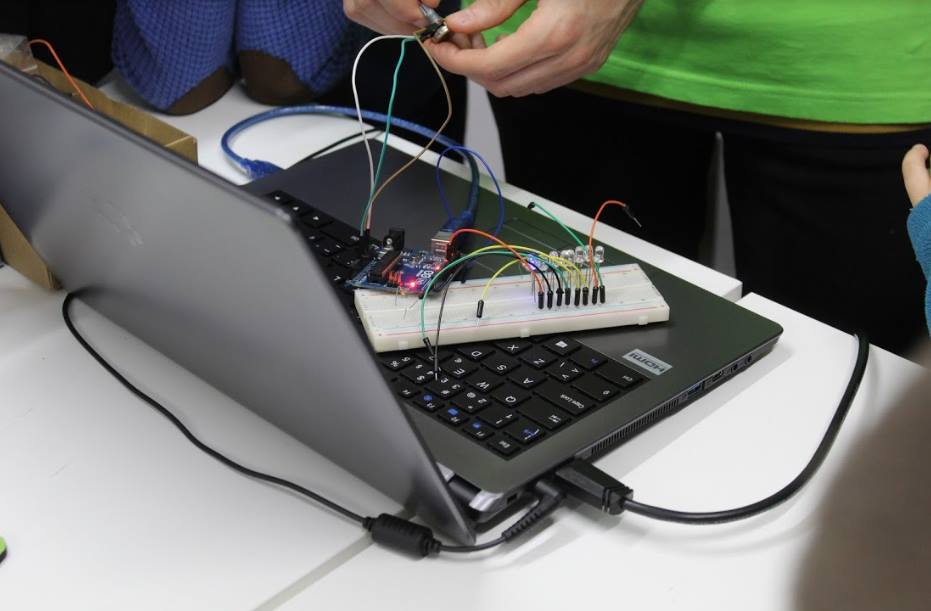 Few days ago I've received an email from a professor asking if I was interested in giving a workshop on Robotics at Happy Code Maia. I naturally was, as it would be a great opportunity to share one of my passions with younger students :)

What is Happy Code?

Happy Code is a school focused in teaching programming to kids; Their goal: "Promote the teaching of programming and computational thinking in youth".

In Portugal's schools we are educated in natural sciences and specialize over time. Despite this, Computer Science, (whose name suggests being a science), is still not covered.

I believe the presence of CS in national school programs is as important as that of any other scientific subjects. There are a number of active initiatives to bring Computer Science to schools, but unfortunately, I believe they fail to grasp the essence of the subject and what ends up being taught is just programming with an apparent claim of being all there is to CS...

Computer Science is much more than just code. If there is interest in introducing students to this world, I would propose a program covering topics in discrete mathematics, the concept of computing, formal languages and just then algorithmic thinking using python (instead of a language like visual basic). Would it make sense to go through such topics at schools? Well, in my humble opinion, I think that would be somewhat similar to what is being done with the other subjects, if that's not appropriate, perhaps we should review the goals of the entire educational program about what tools and mental skills students are expected to have after school. At least this would make the program consistent.

How was the workshop?

The workshop I gave was not about CS nor Programming though. It was about Robotics, a theme vague enough to let me explore a variety of exciting and intriguing subjects. After explaining what automation and robots are about, I've talked about Systems Theory and described what a complex system is, with a special focus on network science. The Internet of Things (IoT) was obviously the best example of a complex graph I could approach as it was an opportunity to talk about how robots can use it to exchange data between them. Furthermore, I wanted to make a bridge between Systems, Control and Robotics, so complex systems was the way to expose some of the challenges faced in the field of Intelligent Robotics (like path planning) and Mobile Robotics (like dynamical systems). We have then moved to Digital Electronics and basic Physics, where principles like Ohm's law and Linear Momentum were covered to explain how Circuits and Photoresistors work, respectively.

"Education is the kindling of a flame, not the filling of a vessel." - Socrates

Although it may look like I spent 3 hours throwing advanced course material at the poor little kids, that was not the case. It is true that I have introduced a variety of hard academic modules. But I'm excited about those things and I believe I was able to share that enthusiasm with them. By the end, some of the students have both asked me to talk more about some things that I didn't originally intend to cover and where they could further learn about this. I've obviously suggested DCC-FCUP!

I think we shouldn't be selecting "the easy stuff" to captivate students, we can't forget what the subjects are about, we should pick the subject and show what it is and why so many people became passionate about it, otherwise we are basically saying people just enrolled because they didn't know what it really was about.

Computer Science is huge and I'm only sad for not being able to "take it all". I'm not following CompSci because it is easy, it's not easy at all. I am taking various elective modules and I choose those that covers "powerful stuff", stuff that will allow me to make change, not easy stuff that I could eventually learn in a work week. I believe this is what quality successful education does with students.

I've enjoyed the overall experience and I'm thankful I was given this opportunity. When teaching kids this young it is a challenge to keep them focused and still show the essence of a topic. Despite that, it was fun and they enjoyed toying with Arduino, sensors and actuators. Furthermore, at the end, when I quizzed them, they were able to explain how to build circuits we'd built and to propose solid solutions for somewhat different situations.

On the other hand, I would rather see them exploring Nature, Literature, Arts and Philosophy than locked in a room exploring science. Kids these days already have a lot of science at school and, IMHO, spend there far more hours than what they really need or should. There will be time for them to explore science, no need to rush things.

Arts, Literature and Philosophy are sometimes dismissed by those in the world of STEM and that's sad, but there are some initiatives working to change that. I really feel those are an essential part of me and play an important role in my life.

I'll be giving a more advanced version of this workshop in Hackers at Porto. I started HaP because I wanted to spend some of my free time, i.e. when not busy learning science in college, with colleagues exploring technology. I think this is a fun way of discovering more about what we want and helps expanding our horizons.